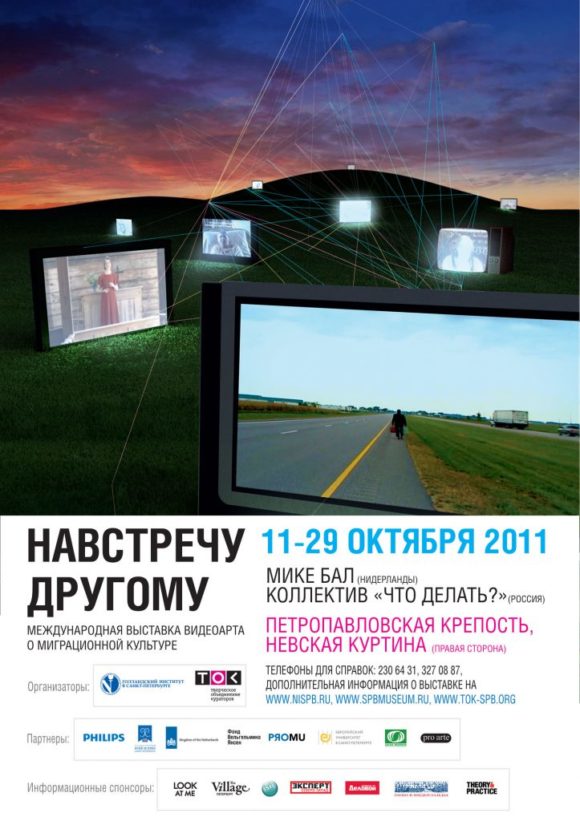 for the Netherlands Institute in Saint Petersburg (RU)
Project development and coordination, curating

Concept of the exhibition
In four groups of videos, the exhibition tries to achieve two, seemingly contradictory, goals at once: to celebrate the positive aspects of the cultural transformations migration has brought about in European – here, Russian – culture, and to understand, and sympathise with, the difficulties migrants experience upon entering that culture. The first goal is meant to benefit in the first place people who are used to Russian culture and sometimes ill at ease with the current mass migration. Foregrounding the conceptual, aesthetic and sensual pleasure these transformations offer, the videos aim to encourage a positive, indeed festive mood. The second is meant to benefit in the first place immigrants who feel met with suspicion, tension, or even outright hostility. Here, sympathy may help to change a reticent ambiance into a hospitable one. In both cases, the move towards the other stands for an outstretched hand, a keen interest, a desire for encounters, a joyful and fearless wish to endorse change as liveliness, not as threat.

“Otherness” does not mean an immutable strangeness but a relative distinction both sides would always experience: for migrants, the Russians will be “other,” while for Russians, people coming from other countries will be somewhat different from the usual. Different from the usual: isn’t that attractive, curiosity-inspiring, drawing us all out of habits that seemed so natural until we noticed that all those routine, everyday gestures, thoughts, and opinions are not natural at all, but embedded in a cultural framework with historical and social roots – in short, enriching?

My artistic concept includes turning a medium that is naturally a temporal one into an immersive, sculptural work. It is also premised on the importance of something uneasily called “beauty” in the encounter with otherness that is the thematic heart of the project. To be represented with dignity not in spite of but in their different backgrounds, the migratory subjects cannot be voyeuristically documented nor represented in caricature. The videos present them in dialogic form, often, against the grain of traditional documentary, looking straight into the camera, addressing “us,” the visitors, on a footing of equality. Hopping from encounter to encounter, visitors are roaming around on a market place, picking and choosing what they like best. And, like a real market in the city, the exhibition is a public space where others move around as well. Who knows what happens?